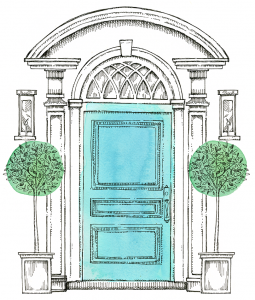 Keeping oneself in a place where you can believe doors are there to be opened in life isn’t easy. I have always been drawn to doorways though…they seem so hopeful. The endless possibility that something behind each door has the potential to be so many wonderful things elicits something in me. It is one of the things that has always drawn me to houses. As a child, and even still today, driving around at night has fascinated me. I love the brief moments of being able to catch a glimpse of people inside their homes, living within the warm glow of their lives emanating from windows. Of course I am always picturing families around tables having meals and laughing together (the Italian in me), sitting around a fire sharing popcorn during movie night or up late deep into heated card games (the Albanian in me). I know that is not always happening in every home every night…it’s not even happening in mine, but the thought warms me. I am going to hold on to the notion that those things could be happening, along with a million other things that bring families together and keep them going. 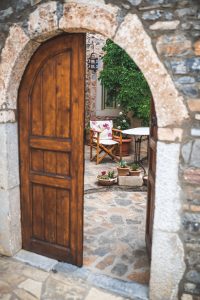 That all said, as I embarked on my mission to build my website, creating the new logo that would hopefully signify and represent my brand in some way wasn’t as difficult as I expected it to be. A doorway…a doorway to my website…to my services…to my process and even a doorway into me and what has gotten me to where I am in my career. I did have to then figure out what type of doorway seemed to reflect that all accurately and that was more of a process, but I enjoyed it.

I decided to take the time to learn a bit more about doorways. In a blog titled “The History Of Doors: A Travel Through Time”, I learned that the first recorded doorways in history were Egyptian paintings of doors or “false doors” that were commonly found in tombs and they represented a gate to the afterlife. That seems to line up fairly well with my notion of something hopeful behind doors. I liked that.

As one would imagine, doors have represented many different things in many different cultures over time. Roman religion recognized Janus, the god of doors and archways or passages. He was also called the doorkeeper (janitor), a god of openings and beginnings…think “January”. The Janus Germinus is a famous door in Rome, serving as the entrance to a shrine built in his honor. Sburiek describes it as a simple rectangular bronze structure with double doors at each end that were closed during times of peace and open during times of war. I find it interesting that they would be open during times of war. It is said that Janus was the first name called upon when the gods were worshiped as prayers were conveyed through his doors. For this reason, he also was considered the doorkeeper of heaven and hell. It is clear that doorways carry a great amount of symbolism. Learning all of this reassured me that choosing a doorway as my new logo was going to be perfect. 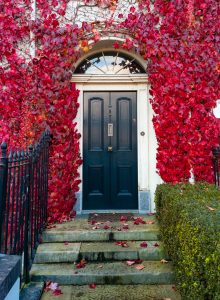 As my vision for my logo started to take shape, color quickly became the most important decision as this color would drive the theme to my whole branding package. I didn’t want to make a decision I would later regret. Of all the colors I tried, “robin’s egg” kept drawing me in. It is a color I have always loved so it did not take long for me to commit to it and I never looked back. It wasn’t until I sat down to write this that I decided to investigate the significance behind this color. I was happily surprised to learn there is a possible link as to why I love it so, other than loving the thought of a box from Tiffany’s under my Christmas Tree. Like the Robin itself, it signifies Spring and new growth and renewal. I also learned that the Robin’s powder-blue eggs are associated with the throat chakra, the center of our will, and reflects the ability of those who have a Robin totem to use their will to create new growth and change in their life. I have not read much about Kundalini energy but this all certainly rings true in my life.

Interior Design has served as a hopeful passage for me on many levels. Designing and creating warm, inviting spaces has always grounded me. Observing and learning about homes has even provided me with comfort. Building my career later in life, as I have, has given me strength and helped me believe that I am capable of achieving goals that had been previously daunting. I never would have thought in a million years that I could have achieved this level of accomplishment and definitely never thought I would have my own website! It is empowering to say the least. I am grateful to have been forced to face fears that made me find the fight I had inside myself. I either had to find my way or succumb to the fears that would keep me from learning that I had it in me to build a successful career. Opening a door to a new path is always there. I am excited to see what comes next. 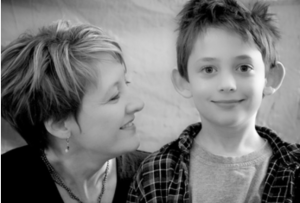 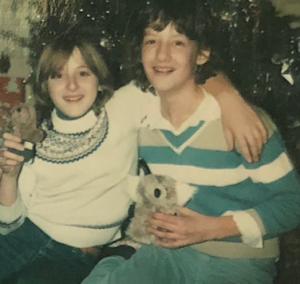 *Childhood friend and artist Jackie Decker is responsible for all artwork on my new website. Jackie easily understood the vision I had for my logo and thus the theme for my entire site. She created a beautiful logo package for me that brings my brand to life and I am excited to share more of her work with you. Jackie and I also have plans to embark on a few other artistic endeavors, so stay tuned.